Skip to content
How Big do French Bulldogs Get?

How Big do French Bulldogs Get?

French Bulldogs have been gaining in popularity over the last decade. Their small size is a huge appeal to people that are looking for small dogs with a calm demeanor. If you are in the market for a French Bulldog you are probably wondering, how big do French Bulldogs get? 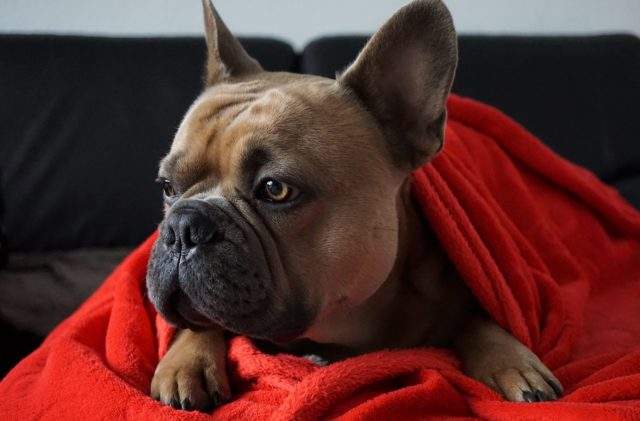 How French Bulldogs Came to Be

The French Bulldog breed was born in England. Someone had decided that they wanted a smaller version of the English Bulldog. They took an English Bulldog and crossed them with local Ratter dogs. Ratter dogs are small breeds that had been bred to hunt down rats and other vermin around the home or barn.

The experiment was successful and a smaller version of the English Bulldog began to become popular. These dogs were very popular with people that made lace. Over the years lace makers moved to France and brought their dogs with them. The worker migration to France is how the miniature Bulldog became the French Bulldog. The breed became popular with royalty and the breed flourished from there.

How Big do French Bulldogs Get?

While there are a few different sized breeds of French Bulldogs, the main breed yields male dogs that get to be about a foot tall and around 24 pounds. The females in the original breed are the same height as the males usually weighing about two pounds less. A couple of pounds may not seem like a big difference in terms of your own size. A few pounds on a French Bulldog can be ten or more percent of their total weight. A few pounds on this breed is definitely noticeable.

The Teacup and Mini french Bulldogs are two smaller breeds. These dogs are are up to seventy-five percent smaller than regular French Bulldogs. Some of these dogs can weigh as little as five pounds. If you re looking for a super small French Bulldog, look around for the Mini or Teacup versions.

The Creation of the Mini and Teacup Versions

The Mini and Teacup versions are not French Bulldogs crossed with another breed. These animals are the result a of a breeder breeding two runt or smaller animals of the liter to create even smaller offspring. Breeding runts is not an easy task. Runts are usually the most unhealthy animals of the liter. These are the ones that will often not thrive and make it to adulthood.

The task of breeding two runts is difficult in that you need to have two runts that are healthy enough to breed an then you have to have a liter that is able to thrive and live well into adulthood on their own. The Mini and Teacup version of the French Bulldog can be registered with the American Kennel Association (AKC) as long as their parents are both French Bulldogs. You can get smaller versions of a French Bulldog by breeding outside of the breed, but then they are considered a mix. It is up to you, if you would like to have official papers or not.

The French Bulldog is a very friendly, outgoing, and loving breed of dog. They are great with children and they do require a decent amount of exercise for a small dog. Most small dogs are not great with children. Their demeanor makes them more like children that have to be the center of attention. On the other hand, French Bulldogs are small and they handle the presence of children and other people very well. The same goes for the Mini and Teacup versions. This may change if a French Bulldog has parents that are outside of the breed, otherwise these make wonderful family dogs, both females and males.

Every dog breed that is recognized by the AKC ha a set of physical standards that it must meet in order to be classified as any particular breed. Here is a list of disqualification standards for the French Bulldog:

As you can see the AKC is fairly strict about how they classify each breed. Even if your dog meets all requirements, but they are overweight, he might not qualify. It is always good to make sure that your dog is in tip top shape,e specially if you have one of the Mini or Teacup breeds. The smaller purebreds can have more health problems as they age than the normal size French Bulldog.

How to Keep My French Bulldog Healthy

You can always talk to your veterinarian about the best diet for your French Bulldog. Many people get French Bulldogs because they are small and good for smaller living spaces in the city. This means that you may not be able to let the dog run around in the yard, or take your dog for a walk around the block every morning. Fear not, there are plenty of great ways to exercise your small dog indoors. Here are some ideas:

Getting a French Bulldog

French Bulldogs are a popular breed. you can easily find a breeder in most areas in the country that can sell you your own French Bulldog. You may have to wait for one of the smaller versions, or you can always look around for a rescue. No matter what, these are great family dogs and they work well in small spaces. You can get creative when it comes to exercising them and they are intelligent dogs. Now that you know the answer to how big do French Bulldogs get, will you be looking for one? Let us know in the comments below, and enjoy!

If you are looking for a Frenchie you can apply directly.